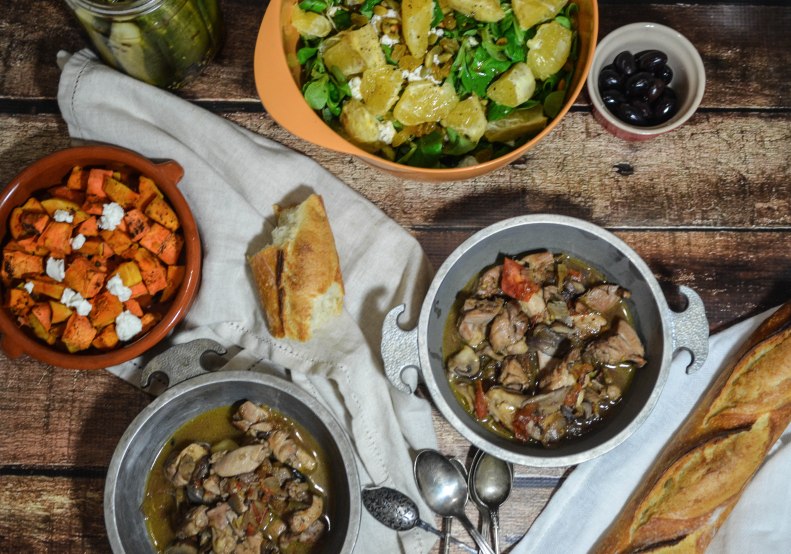 Every time the season changes the world seems to open up in a new way. Our perspectives change and the way we approach the world, even physically is different. Walking to work in the mornings I pass Central Park with its leaves ablaze and gently falling around me. Though I miss the longer days, it’s hard to lament the arrival of fall with all of its colorful bounty and more earthy beauty. Rather than bursting with life, the mornings feel pristine and enchanted. The best way to connect with it for me is through the humble magic of kitchen arts.

So much a part of that mystical feeling is the lore of mushrooms and mushroom hunting. In my fantasies I am a mushroom forager. I stomp through the thick blanket of forest wielding a knife with the elegant precision needed for such things. While I did grow up in a beautiful woodsy town with mushrooms everywhere, I never had the knowledge to figure out which mushrooms were poisonous. Instead, I rely on the farmers market where I met a couple who cultivates the best oyster mushrooms I’ve ever tasted out of Ithaca, NY. Maybe one day I’ll meet a mentor for wild mushroom foraging. Maybe one day when walking past the beautiful landscape outside of Boulud’s restaurants in the mornings, he’ll come out and say “Why don’t you come join me in the kitchen for a morning?” 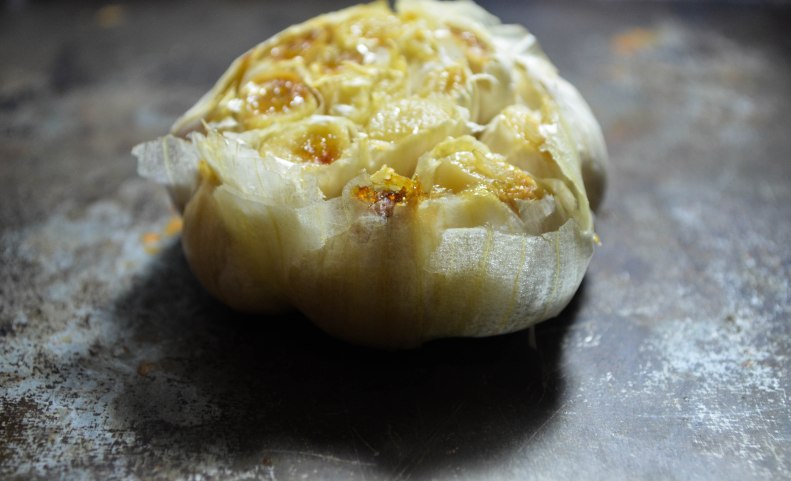 Speaking of fantasyland, let me tell you where this recipe came from. As you may have read, I have a secret crush on someone in my apartment building based upon the books he or she has been leaving in the garbage. Could she be an older woman? A professional cook? A handsome gentleman? Then the thought occurred to me, “why is he/she throwing all of these great cookbooks out?” Well after a few weeks of mystery I got my answer this weekend. The woman in the apartment below me moved out. It was her! I had my suspicions, as I’ve seen her carrying pies before. I’ve smelled her searing meats and roasting chickens, but I could never be sure. As she was leaving I caught a glimpse of her large farmhouse table, which is honestly way too big for an apartment the size of ours, but it showed me where her priorities lied. I picked up one of the Food and Wine magazines that she left behind outside and found this perfectly seasonal recipe in it. 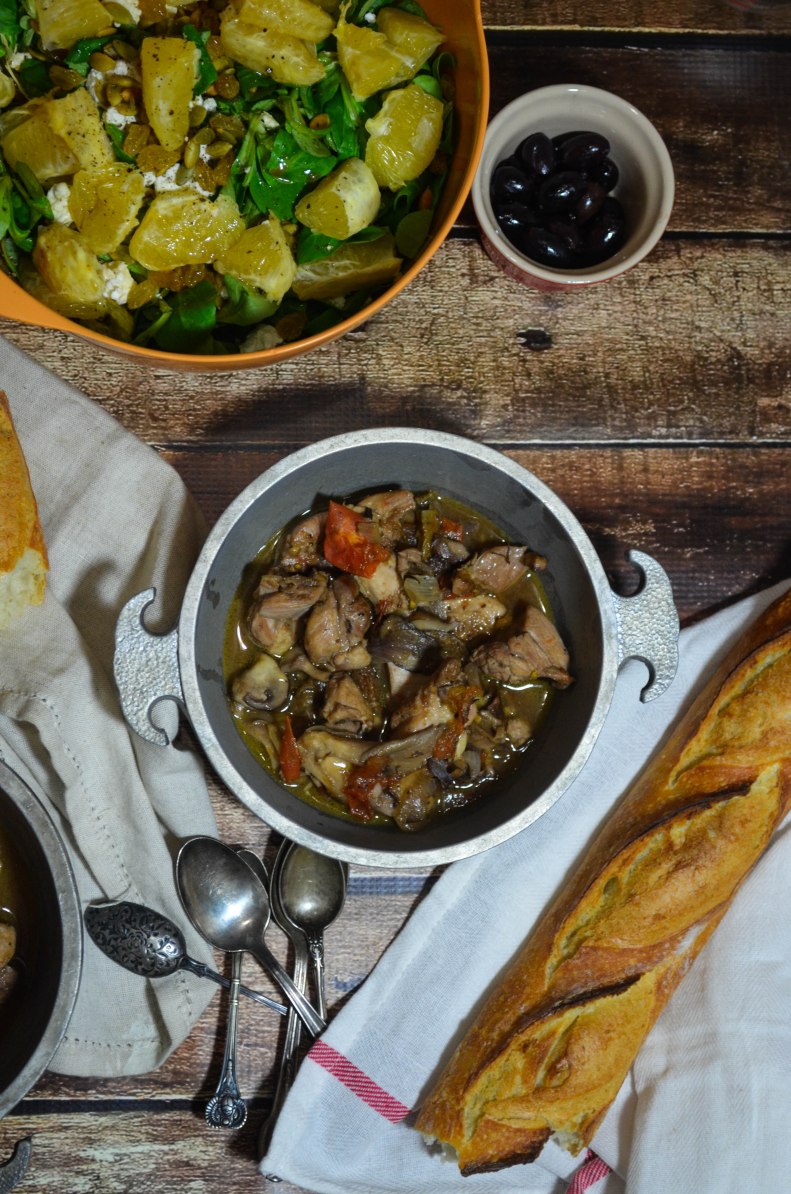 To honor the mushrooms of fall and the spectacular miracles that life likes to throw at you–like incredible kindred spirits and friendships that just missed each other–I made a dish that features mushrooms with my two favorite things: red wine and an entire head of roasted garlic drizzled with olive oil. I’ve been known to indulge in both vices with frequency. When I was a kid, my dad, my brother and I used to roast garlic heads and eat them straight from the oven. The garlic would emanate from our pores at night. My mom swore I’d never get a boyfriend if I kept eating garlic like that. A threat or the truth? I let my vanity get the best of me and stopped for a bit, but let the men carry on the tradition. We women seem to be a more forgiving lot.

While the recipe says this is a saute, I used my dutch oven for the whole thing then reduced the sauce at the end. I think it’s a superlative dish either way. So consider this my homage to a good cook making do in a tiny apartment (and who possibly moved to a bigger kitchen!). To fall. To light jackets and boots in the forest. Crisp air, sparkling mornings. To all who fly by the philosophy of incurring burned fingers by night and manicured hands by day. To surprises and to cultivating your dreams. 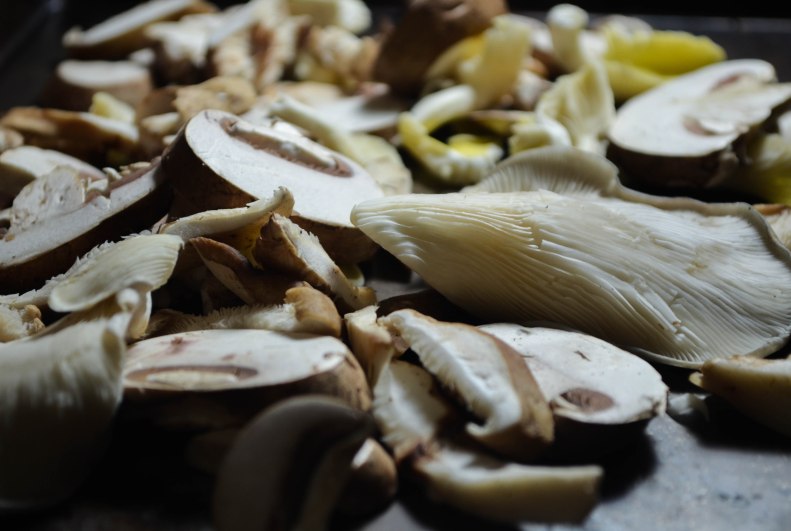 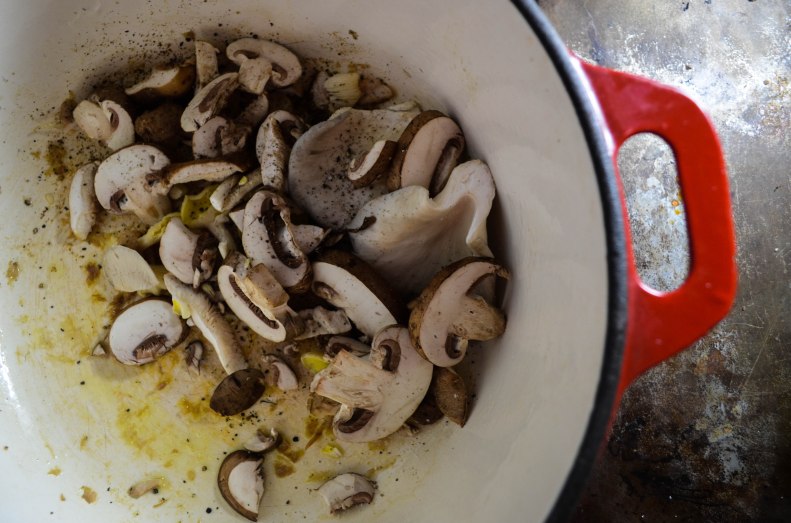 Preheat the oven to 350°. Set the head of garlic on a double layer of foil, cut side up. Drizzle with olive oil, then wrap in the foil. Roast the garlic until very soft, about 1 hour and 30 minutes. Let cool, then peel, keeping the cloves intact.

Meanwhile, in a heatproof bowl, cover the porcini with the boiling water and let stand until softened, about 15 minutes. Rinse the porcini and coarsely chop them; reserve the soaking liquid.

In a dutch oven, heat 1 tablespoon of the olive oil. Season the chicken with salt and pepper and spread in a single layer in the skillet. Cook over high heat until browned on the bottom, about 4 minutes. Transfer to a bowl.

Add 1 tablespoon of the olive oil to the dutch oven. Add the assorted mushrooms and season with salt and pepper. Cover and cook over moderate heat, stirring a few times, until browned and their liquid has evaporated, about 5 minutes. Transfer the mushrooms to a plate.

In the dutch oven, melt the 1 tablespoon of butter in the remaining 1 tablespoon of olive oil. Add the shallots and cook over moderate heat, stirring, until softened, about 3 minutes. Add the red wine and boil over moderately high heat until reduced by half, about 2 minutes. Pour in the reserved porcini soaking liquid, stopping before you reach the grit at the bottom. Add the chicken stock, tomatoes, mushrooms, porcini, roasted garlic and chicken and bring to a simmer. Remove from the heat. Add the tarragon and season with salt and pepper. Swirl in the 1 tablespoons of chilled butter.

When it’s all mixed together, Pour the sauce into another pan over high heat and reduce it by half, until it’s thick. Separate the chicken into serving plates or bowls and spoon sauce over chicken. 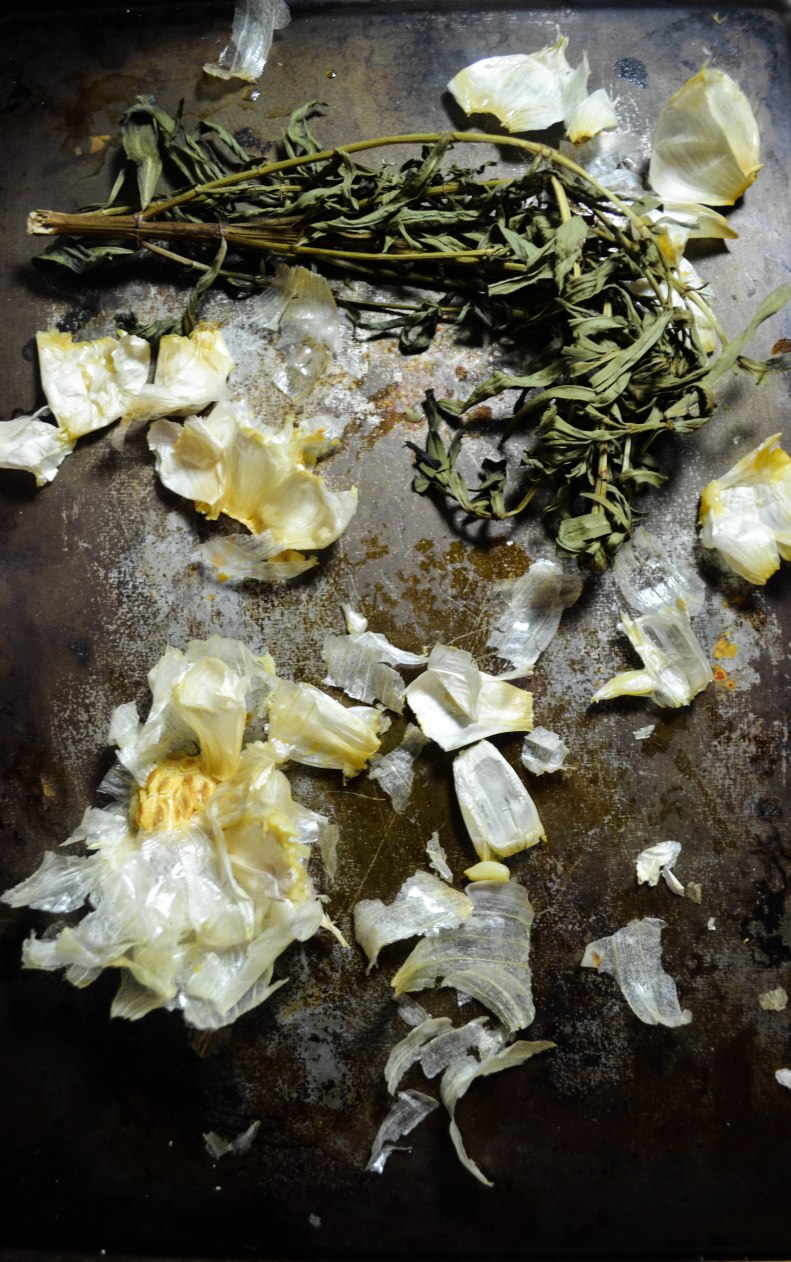 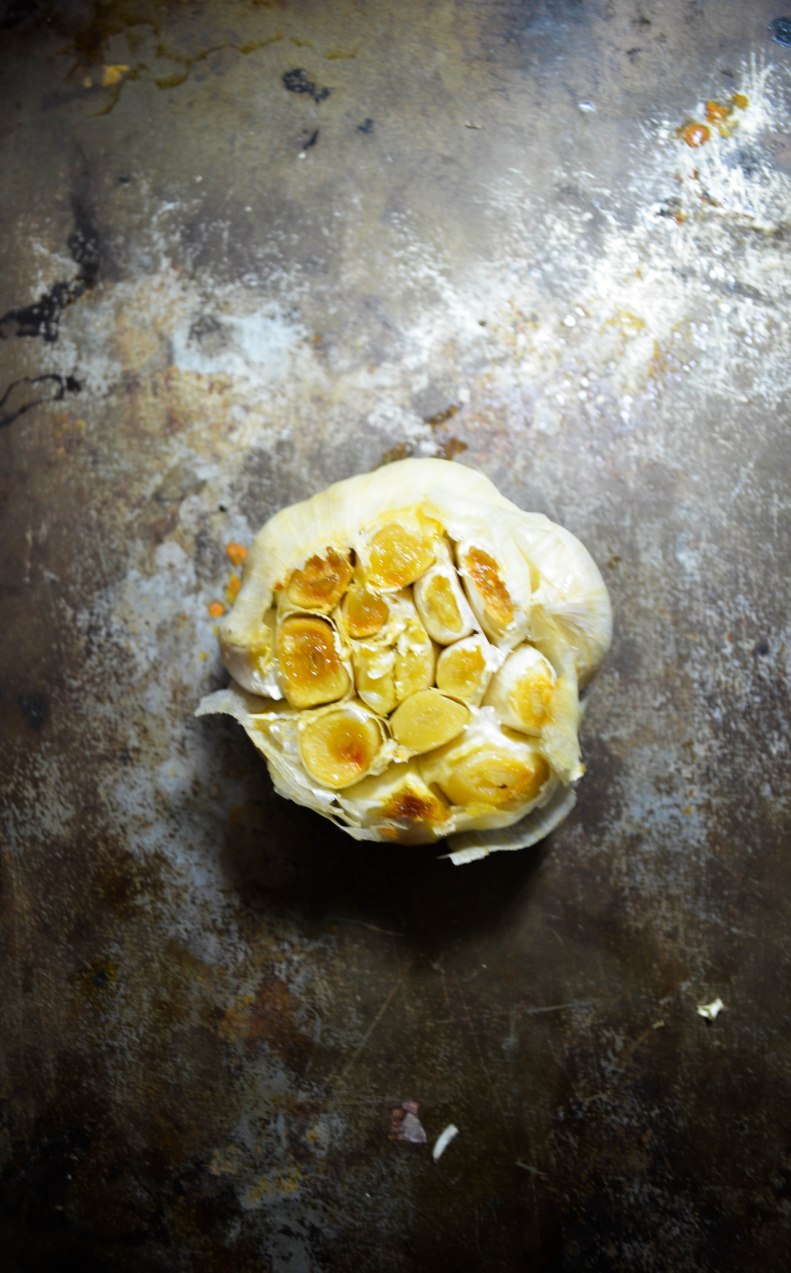 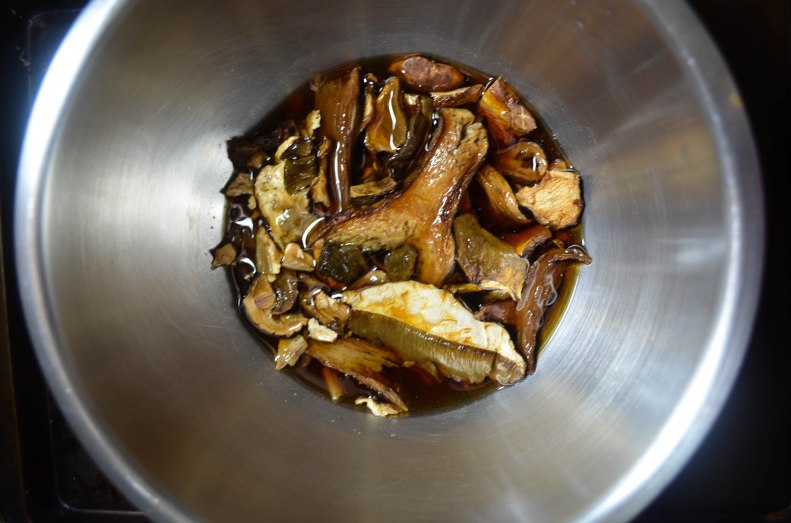 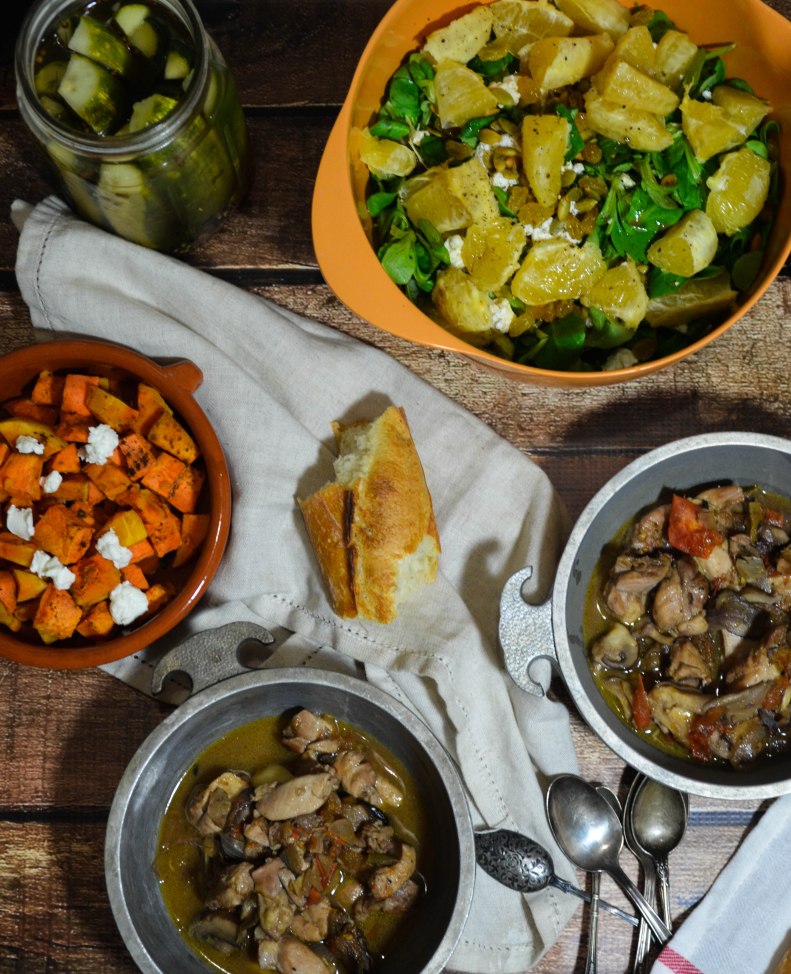