Two squash recipes in a row!  Fall is here and instead of lamenting I’ve decided to embrace everything I love about fall. Crisp mornings, elaborate Halloween decorations in every New York City building, pumpkin picking, Edgar Allen Poe stories, high boots, over-sized sweaters and warm spiced baking with things like these squashes.  No, you won’t find me looking forlornly facing south and dreaming of warmer places where everything swells with summer’s opulence. As the darker months bring their chill, I’ll look instead to the leaves showing their true colors, resplendent after months of hiding behind their chlorophyll.  I’ll look to the sky, welcoming Orion back from his trip to the southern hemisphere, returning to make way for the birds’ migration. And I looked again to Ottolenghi and Tamimi’s Jerusalem to find the perfect recipe.

I ultimately ended up using their idea for the chermoula eggplant with yogurt and bulgar, which I’ve adapted before for my Spiced Stuffed Eggplant. This dish comes together quite quickly. Flavor builds upon texture as the vegetable, dairy and proteins comprise a delicate framework for a singular, spectacular dish. The deep cup of the acorn squash serves as a perfect platform for the chermoula spice paste, the North African flavor base for the rest of the meal. The sweet currants and salty, toasted almonds play as a counterpoint to the finely minced and flavored turkey, which is then tempered by a cool drizzle of yogurt, fragrant mint leaves, a splash of olive oil and a hint of cilantro. 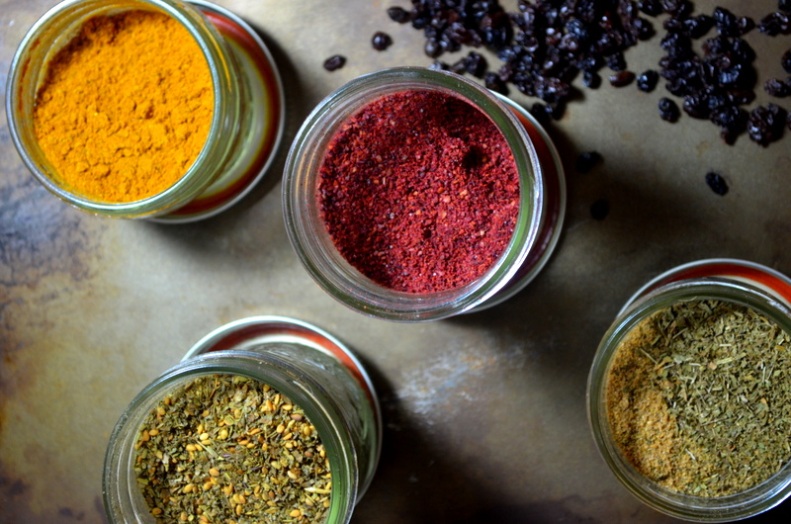 To make the chermoula-like spice, mix in a small bowl the 1/2 of the garlic, cumin, coriander, chile, smoked paprika, lemon juice, 2/3 of the olive oil and 1/2 tsp salt.

Cut the squash in half lengthwise.  Spoon most of the paste over each half, spreading it over the squash it on a baking sheet cut side up.

Mix the rest of the paste into a bowl with the ground turkey. Add the rest of the garlic, some more cumin, lemon, salt, coriander, and some pepper to taste. Add the breadcrumbs and an egg. Scoop a handful of the meat into the squash, leaving a little room to add the quinoa later. Insert into the oven for 45 minutes.

Meanwhile in a pan.  another pan, boil the water and add the quinoa. As the quinoa boils, you will start to see a white ring outside the grains. When you see most of them have sprouted, add the dried currants, almonds (which you can toast in a pan if you’d like), herbs, scallions, lemon juice and salt. Set aside.

When the stuffed squash is ready, pull it from the oven and top with the quinoa wherever there is room in the sqush or eat on the side. Spoon a few dollops of yogurt on each half, sprinkle with cilantro/scallions/mint/extra currants and a drizzle of olive oil. 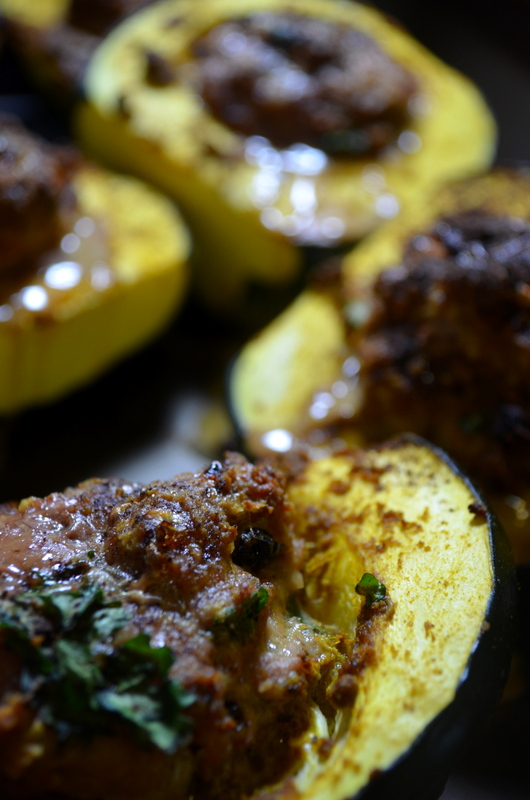