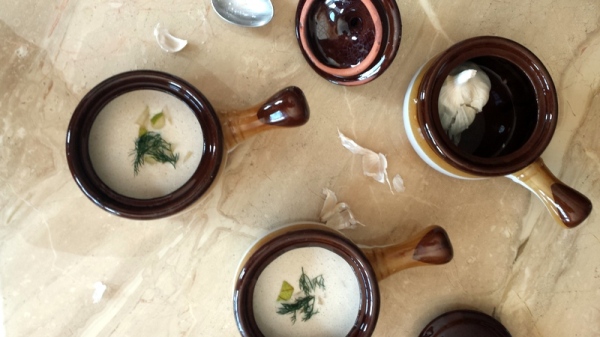 Something about the heat of summer has me experimenting with all sorts of gazpachos. A few years ago, cold soups would have sent me running. I’m the kind of person who eats hot soup even in the most sweltering of seasons, however one trip to the south of Spain helped me understand the pressing need for a cold, refreshing soup. Now it seems like I can’t get enough of it. This version of gazpacho is by far the biggest diversion from the classic made with tomatoes. It is made with blanched almonds, green grapes and other fragrant fruits. A splash of vinegar rounds out the flavor, some old crusty bread adds heft. 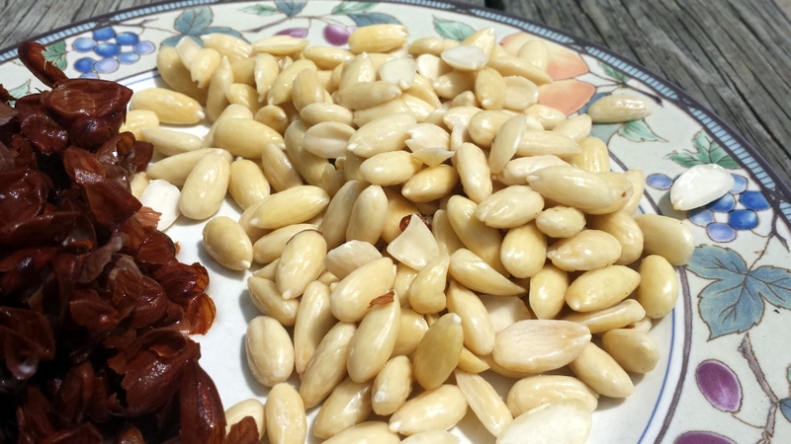 The original gazpacho began with only four ingredients: bread, olive oil, water and garlic. It was a gruel that the workers in Spain would take with them in the morning on their way out and if they happened to be working in the almond orchards, almonds might make their way into the soup. If they worked in the vineyards, grapes made their way in. Likewise with tomatoes. This ajo blanco is a canvas for the imagination and the ingredients are the color palette. I transported myself to the almond fields of Spain incorporating grapes from the vineyards and pears from the trees.

At first, when I saw the recipe required me to blanch almonds, I wondered two things: a) how? and b) why? The answer to the first question is below. It’s actually quite easy to blanch almonds and the step only adds an extra 10 minutes. As for the why?… Blanching the almonds and peeling off their skins little by little connected me to the generations of yore, allowing me to partake in a custom that dates back to the Moors and Roman times. There is a timeless quality to having your hands in warm almonds and ripping the skins off one by one. It tried my patience in the beginning, but the more time I spend peeling, the more contemplative I became. Sometimes it’s nice to just slow down and remain in the moment, attention focused on the task at hand. Our lifestyles today aren’t really conducive to spending hours or even minutes on each process. It’s so much easier to go to the store and buy shelled and peeled almonds. But, when you do that, you miss out on the reward of doing it the old fashioned way, especially when the time added is minimal. Something as ingenious as just adding a little boiled water to a task you thought might take days (aka peeling a few cups of almonds), whittles it down to just minutes. Peeling the almonds reminded me of husking corn as a kid while my mom was in the kitchen preparing food for barbecues. My siblings and I would beg my mom to let us husk the corn, delighting in the chore and wrapping each other up in the corn silk, using the tough husks as weapons. When did what once was a joy become a chore? When bigger and more complicated things got in the way? Sometimes taking a brief time out to do something right, to do it yourself, brings the joy back to what seems like a time-consuming nuisance. The almond milk, on the other hand, takes forethought, a virtue I rarely display. Next time I’ll plan in advance and attempt that on my own as well. However you do it, the fruit, bread and nuts combine to form a smooth, hearty, refreshing way to relieve the heat of summer. 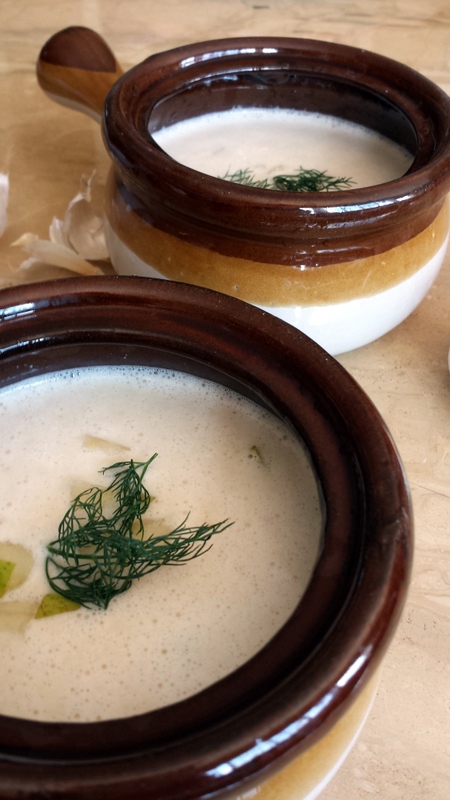 how to Blanch the Almonds:

To begin, start with raw almonds. Note that most almonds sold in stores marketed as “raw” have already undergone a pasteurization process. That’s OK; just avoid any almonds that have been roasted, especially with added oil and salt.

In a bowl, pour boiling water over the almonds and let them sit for one minute. Next, drain the water and run the almonds under cold water to cool. Drain.

Once the almonds have been drained and rinsed, you should notice the skins beginning to shrivel. To peel an almond, simply hold it between your thumb and index finger and peel back. The process shouldn’t take more than a few minutes.

Combine the almonds, bread, water, almond milk, oil, salt and vinegar in a blender. Blend until smooth, adding water or ice if the mixture is too thick.

Separately, cut up whatever fruit you plan to use. In my opinion the more the better. It adds a bright, citrus taste to soften the nuttiness. Place the fruit in the middle of each serving bowl and pour mixture over it. Garnish with dill. Serve ice cold. 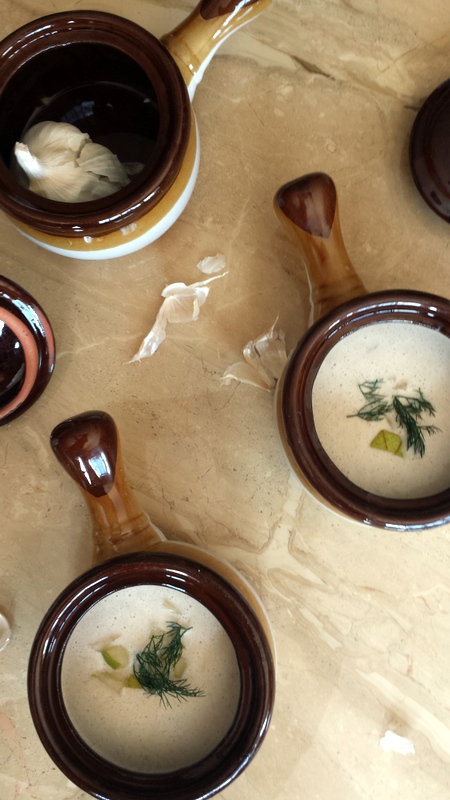 More pics of my hometown.